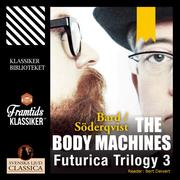 Hörbuch-Download
Following the massive international success The Netocrats and its ambitious follow-up The Global Empire, in this third installment of The Futurica Trilogy, Bard&Söderqvist approach something far more personal - the fragile human being herself and, most of all, her brain. The Body Machines, with a title borrowed from René Descartes, explains what a brain is, how it has developed and how it functions, and why it spends such an incredible amount of time and energy on fooling itself. The Body Machines matches and mixes the latest neuroscience with philosophy and psychoanalysis, in the process portraying a confused but incredibly interesting little machine that is doomed to constantly create new fictions about itself and its surroundings for its own consumtion, but which remains social by nature, and therefore able to create, together with other similar machines, enormously productive communities. The Body Machines is not only a work of science but also a work of philosophy, a prophetic book on how the humans of the digitalised and globalised future will have to view themselves, their world, and what values and valuations will come to dominate and replace the old and dysfunctional humanism. This is a hybrid book by hybrids for hybrids. This book is part 3 of 3 in the Futurica Trilogy. About the triology: The Futurica Trilogy is a work of philosophy, sociology and futurology in three closely related movements. The first volume, The Netocrats, deals with human history from the perspective of the new elite of Informationalism, the emerging society of information networks, shaped by digital interactivity, making prophecies about the digital future of politics, culture, economy, et cetera. The second volume, The Global Empire, explores the near future of political globalisation and the struggle to form new, functioning ideologies for a world where global decision making is a necessity. The third volume, The Body Machines, deals with the sad demise of the Cartesian subject.